The Ghost of Sterling returns to haunt City again! 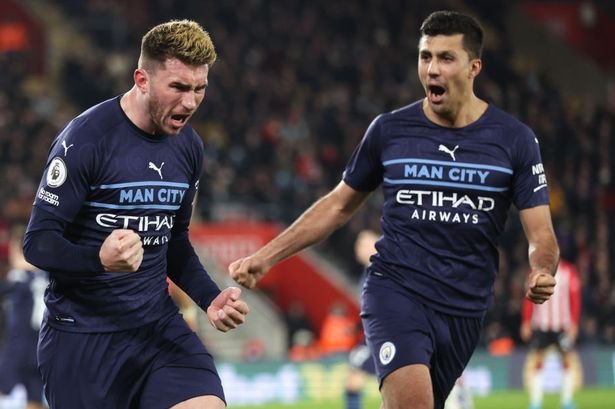 Not again Raheem!! That was my first exclamation at Sterling’s miss. Time seemed to stand still as Sterling received to tap the ball into an open goal, only for destiny to have other ideas in mind. How could he miss as easy a chance as that still bothers my mind. In the end 1-1 was a fair result on the balance of play. I thought Southampton were very good in the first half and City came to the core in the second. Maybe, Kevin De Bruyne and Gabriel Jesus striking the post would make a few fans feel that luck was not on our side. But all of that is trash talk. Champions carve their own destiny and create their own luck.

Sterling with a lot of time is disaster waiting to happen

In the 2017 season, Sterling scored a banger from outside of the box in injury time to steal all the 3 points against the very same Southampton team. Just a month ago, Sterling applied a one touch outside off the foot finish to a gorgeous Cancelo ball aginst Everton. Admist all this, you are left to wonder how someone who can finish off so incredibly can miss open goals like this.

The problem is not with Sterling missing open goals, but the alarming regularity with which he misses them. I think that when Sterling is given a lot of time, he just panicks and dosen’t finish well. this can quite clearly be seen in his body language when he runs one on one at the goal keeper.

How can Pep trust Sterling again in big games, where chances come at a premium and a single mistake can knock you out of the competition. I think Pep is in a bit of a dilemma here, The strength of Sterling is his ability to get into those dangerous positions and his weakness counteracts his strength here. This is actually quite a bizzare and difficult situation to be in as a manager. We know that Pep plays someone based on their strengths and not lack of weaknesses. That is the only reason why Sterling is still playing in this City team.

Grealish is much better centrally

Atleast Sterling was getting into good positions in the first half, but Grealish seemed completely anonymous. There were many instances when the ball was played out to him, but it just looked like he did not have any confidence what so ever. Grealish for me seems like he is confused whether to take on his man or pass the ball to the nearest City player. Many fans have been complaining that Grealish slows the game down by trying to dribble past his man. Grealish now feels like he should not be responsible for giving the ball away and this is puting more pressure on him

Playing centrally gives him more space and he somehow does not look suffocated and under the pressure of beating his man. Also, i have always felt that Grealish is a strong runner withe ball and a great ball carrier. So, playing centrally actually suits him more than you might think it would.

Specially in the first half, Southampton seemed to bamboozle City with their dominance. City were geting out numbered quite often defensively. Southampton left 2 strikers upfront at all times throughout the first half and this pinned back Dias and Laporte. This meant that Rodri was caught in 2 minds and was unable to link up attack and defense efficiently. I thought this was quite a unique way of stopping City’s CDM without man marking him.I thought even with 2 strikers up front, City should have been more courageous and played a high line. That was where more than half of the battle was lost for us.

The dropped points are a wake up call for us and we must remember that the title race is never over until the very end. We must now pick ourselves up and go on an other winning run. Title races can be ruthless and even a single slip up can drag you down like quick sand